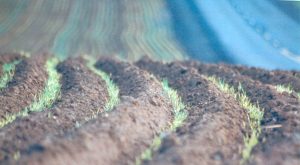 Wheat accounts for about 91% of the acres planted each year to grains in Sherman County, making this county among the largest wheat producing counties in Oregon. Farmers use a dryland method of farming, meaning half the farm is "fallowed." Fallowing is a conservation practice that allows the soil to collect two years of moisture to produce one crop. About 90% of those acres are then seeded, in the fall, with winter wheat.

Fall-seeded wheat plants emerge from deep furrows created by the drills that plant them. The deep furrows block hot, drying winds from stealing moisture or cold winds from freeze-drying the plants. The furrows also catch snow to provide an insulating winter blanket and release the snow’s moisture, adding to the ground's moisture profile.

The most-frequently identified wheat are the "common soft white wheat" varieties.  These have long heads, usually with "awns" that lend a bearded look.

Club wheats also are classed as soft white wheat but derive the name from the shorter, club-like seed head shape. The seeds are smaller (12,000 to 15,500 seeds per pound) and their protein is lower (7.2 – 8.5 %), a desired trait in many end products. Club wheats are usually awnless or may have short awns and the chaff may be white or dark colored. The chaff color does not affect the seed color or quality.

Another cereal grain produced on a limited basis is Triticale, a man-made cross of wheat and cereal rye. Triticale has longer heads and seeds than the soft white wheats and a higher protein (10-14%). Although it can be used for making bread (with a slightly nutty flavor but without the typical bite of rye bread) it is primarily raised as a feed grain. Both the seeds and straw residue produce a feed preferred by cattle and wildlife.
Cereal rye was once raised for its feed value in powering the stock that pulled farm implements. However, it has since become an undesirable weed in other crops.
Less common is the wheat class known as Durum, characterized by beautiful long, dark awns. Durum is a hard wheat with higher gluten and protein and is used for making pastas.

More Differences You Can See 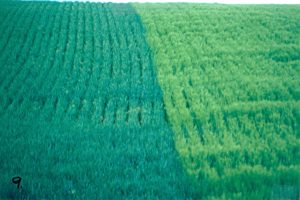 Late in the spring, even at heading time (May – June), color difference may be noticeable from afar. This picture shows wheat on the left and barley on the right. Barley also can be fall seeded or spring planted. It makes up about 9% of the annual grain production in the County.

Sold mainly for livestock feed, barley can be referred to by varietal characteristics such as being six-rowed and/or awned or bald or two-rowed. Two-rowed barley may produce yields equal to or better than six-rowed barley. Stages of growth include heading, when the seed head pushes its way through the sheath that has protected it in early development, followed by flowering when the plant releases and catches pollen in order to actually produce seeds.

Soft white wheat, with its lower proteins and gluten content, does not rise much when baked so it makes a shorter loafed, heavier bread, not very desirable as common sandwich breads go. It does however win the “cookie spread test” — a simple test used by millers and bakers. The wider the spread and the more cracking the more preferred the final product.

Once the grains are harvested, the next major step is marketing the grain. About 85% of soft white wheat is exported around the world to be made into food. Oregon wheat truly does feed the world.

Farmers may sell their grain for cash or elect to store it either in farm storage or at local cooperatively owned warehouses (known as "elevators") for later sales. Since so much grain is sold to other countries, it must be shipped to ports in the Portland region to be loaded onto ships. The farmer pays the cost of shipping to the Portland area.

Most grain is shipped on barges which carry about 116,000 bushels each. The Columbia River averages two four-barge tows a day, or nearly one million bushels per day. That reportedly makes it the third largest grain export corridor in the world. Without the barges, another 1,000 trucks per day would be needed for the transport to Portland.

We hope you enjoy the place where this food journey begins: Sherman County, Oregon.